Moody's: Much More Than a Delicious Deli

Moody's Delicatessen and Provisions with the Back Room is the best thing to happen to Waltham since I graduated college. Over the summer, I sat in the Back Room and this time, on a Tuesday night in February, the Back Room was so full that we sat in the window of the front of the deli. They must have added these seats because business was so successful.

The front room had deli cases and refrigerators full of house cured charcuterie. Along the walls were some wooden tables and benches. Chef Joshua Smith runs New England Charcuterie and Moody's. All of the charcuterie is made in house-- rumor is there is a downstairs where sausage, salami and other charcuterie is made. The back room has a different, slightly more formal look and feel.

Upon sitting down, I was greeted by a plate of complementary charcuterie. I was so hungry, there's no picture of it. But, it whet my appetite for the carnivorous feast yet to come. The first thing we ordered were the meatballs. There were four perfectly seasoned waygu meatballs perfectly seasoned with pepper, cheese and spices smothered in tomato sauce with ricotta and Parmesan cheese. 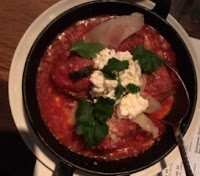 We let the waiter surprise us with a four part cheese/charcuterie plate. The cheese was an aged gouda and the other cheese was soft and creamy. The charcuterie was coppa and salami. The salami was soaked in Bourbon and the coppa was fresh, thinly sliced and perfect with the cornichons, jam, hot peppers and crostini. There was a year where my new years resolution was to eat more charcuterie and so it has a special place in my heart. Everything about the cheese and charcuterie plate was perfect and my only wish was that we'd ordered the plate with six choices instead of four. 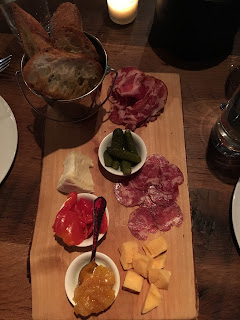 While everything was fun and tasty, we were still hungry so we splurged for one more dish, the pastrami flat bread. This was essentially an open faced Reuben with homemade sauerkraut and mustard instead of Russian dressing. The pastrami was tasty and while sparse on the pizza, the flavor was that of a large sandwich. 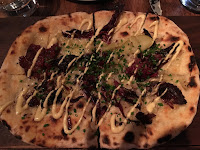 Usually, I save room for dessert, but at Moody's, I decided on a flat bread instead of dessert and I couldn't have been happier. The flat bread crust was flaky, and tasty. While the dessert menu looked excellent, I will just have to go back for more local salty goodness and maybe, just maybe, I'll save room for a sweet dessert. Though, I wouldn't count on it. That savory food is worth all the hype it gets.
Posted by Food, Friends, 'n Fun at 7:40 AM No comments: