Eastern Standard is worth all of the hype it gets. I've only had consistently great meals and service there. No matter what I eat, it's satisfying and creative. Since it was a weekend between 10 and 2, I was geared up for some brunch. I define brunch as breakfast, but bigger. Eastern Standard had a part brunch, part lunch menu because it was Saturday and they only serve full brunch on Sunday. The food was awesome, but sitting outside comfortably in late October was the best part.

After pondering the menu for a while, I was set to order eggs. The past few times I dined at ES, I had a pastrami sandwich and since it was missing from the menu, I branched out. My dining partner had settled on the Croque-Madame. When the waiter told us the addition to the menu, I made a quick change and went for the homemade ricotta gnocchi with veggies and lamb sausage. I am a sucker for homemade pasta, and I figured the gnocchi would be the perfect substitute for all the bread I'd eat if I chose a breakfast option. We decided to balance the extreme carbs with a side salad. 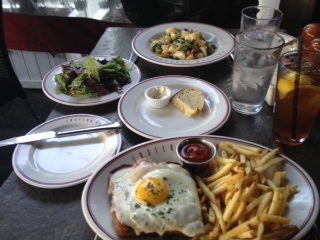 After enjoying the fresh bread, butter and good conversation, the meals arrived. I started eating the perfectly cooked gnocchi with fresh almost crisp cauliflower, pea pods and tomatoes  The gnocchi was seared on the outside and right amount of chewiness. I could not find the lamb in my dish. Not to worry though, because the waiter could not have been nicer when adding it. They re-plated my dish with the lamb sausage, so it went from being a gnocchi primavera to a unique combination of gnocchi, lamb and veggies. I hope that in the future they make both the pasta dishes available. While the lamb sausage added a lot of flavor and smokiness to the dish, it was just as good and even a little bit lighter without it. 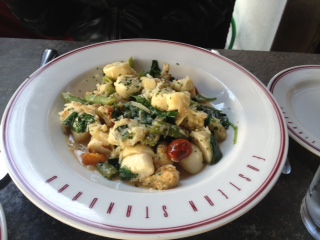 The side salad was tasty. It was mesclun greens with a garlicky mustard vinaigrette  Given the size of our entrees it was the perfect size to share. Sometimes at Eastern Standard, I find myself having the great salad versus french fry debate. The fries at ES are thin and perfectly crisp with some fresh herbs and the salad has those qualities with the added health benefits. At lunch we had our salad and fries too, because my dining buddy's dish came with fries. 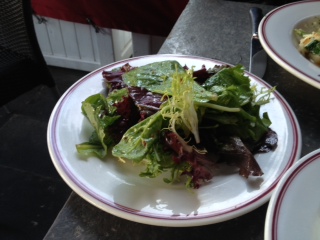 The Croque Madam was beautiful. It was a layer of french toast topped with ham, cheese and a sunny side up egg and french fries. The dish looked to pretty to eat, and it tasted as good as it looked. The combination of sweet and savory was great. If I had to categorize it, I'd pair it with eggs Benedict because it had most of the same components. We joked about how big the dish was, yet it was devoured. I'm glad I got to try it because, had I ordered it, I probably would have been full for 24-hours and I never like skipping meals! 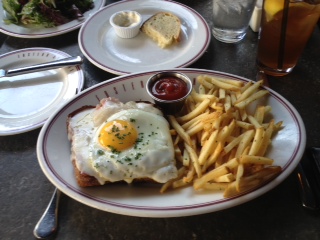 I appreciated that even after I had the waiter put my leftover two bites of pasta in a doggy bag that they still offered us dessert menus. The desserts sounded delicious, and I was tempted, but we opted to get the check for fear that we would be unable to stand if we ate anymore.

Eastern Standard is one of my favorite restaurants in Boston. Jeremy Sewall is an artist! Their menu has a large variety of dishes with an array of ingredients and prices. While I have yet to go for dinner, I can vouch for the outstanding breakfasts, lunches and brunchielunches. Maybe next time I go, I'll steal less fries and have room for dessert!
Posted by Food, Friends, 'n Fun at 9:48 AM No comments:

This is a somewhat impromptu post as I expected to just get a few apps when out for my friend's birthday last night at the Hawthorne, but wow, I got so much more. By so much more, I got a very tasty Caesar salad and the chocolate pot de creme for dessert.

The ladies around me had amazing looking drinks and got a few other apps. I decided given my low tolerance and the fact that it was a Monday night, I'd stick to apps and dessert. I tasted the potato skins which were really stuffed full fingerling potatoes. They were perfect and delish with bacon and a hint of mustard and cheese. I also tried the olives. The portion was large and the olives warm. My salad was perfectly chopped and dressed. I even forced myself to eat the anchovies. I think anchovies get a bad rep and are actually quite tasty.

I waited for a while for my dessert. I am notorious for going out and getting just dessert, but I figured I should fill up on something else first. The pot de creme was perfect and fulfilled my chocolate craving. My only wish is that I'd taken a picture. It was like rich chocolate pudding with salt and orange on top and really think rich whipped cream. The consistency was thick and creamy and the salt enhanced the chocolate. I don't usually eat orange rinds, but this dessert had some and they were shaved so finely, that I just ate them with the rest. For the prices I paid, I felt like the dessert was the most reasonable $9. While the salad could have been bigger for the $11. I will think about this dessert often and probably find myself at the Hawthorne bar often in search of it. I hope for the willpower to not visit more than once a week. Looking forward to next time I stop by where I'll pair it with a fancy drink or one of their large glasses of wine.

Next time you go to the Hawthorne for their signature drinks, check out one of the best desserts in Boston too. And if you feel like being nice, get a spoon or two to share it.
Posted by Food, Friends, 'n Fun at 7:28 AM No comments: