A Mid-afternoon Dream at Strip T's

It was a cold and snowy Thursday after a successful trip to Target, and I stopped in at Strip T's for an indulgent tasty treat. This place is worth all of the hype it gets. The food is great and unique and service is quick and reliable. When I worked in Watertown a while back, I had to keep from eating at Strip T's every day for lunch. This was before the Tim Maslow era, back when it was just a neighborhood shop to get a soup, salad or sandwich. Since the reign of Maslow, I've driven to Watertown a handful of times with the intention of having a fantastic and creative meal and am consistently satisfied with the result.

Luckily, I arrived at 3:53 pm, just in time for the last plate of food to be served before the hour break before dinner. All I knew was that I could not stop thinking about their Caesar salad, and that I wanted to try something new as well. Shawn, one of the front guys who worked at Craigie on Main previously, advised that between the Moxie Wings and Fried Chicken that the fried chicken would go better with the Caesar salad. Each entree comes with a side, so I was pumped that I could have two mini-meals in one! He and I chatted about how the comfort food matched both of our moods with the dreary, wintry mix. I chose to sit at the bar because I was at Strip T's with the purpose to eat the best Caesar salad ever and some protein.

The restaurant is quaint. When I walked through the curtained front door, I saw a bar with a half open kitchen and people preparing for the dinner shift. To the left was the main dining room where some of the best food around is served.

At about 4:03, my half of a chicken fried arrived with my baby Caesar salad. The crust of the fried chicken was perfectly crisp and the chicken inside was moist and juicy. I was really excited that they brought a full, three joint wing, thigh and breast because I get a real kick out of eating and taking apart wings, but the other cuts of chicken are a little bit more hearty. To go on the chicken, Shawn brought over some pepper syrup. Essentially this syrup tasted like honey with a tiny almost unnoticeable kick to it. The sauce was perfection as the sweetness of it brought out the saltiness of the chicken. 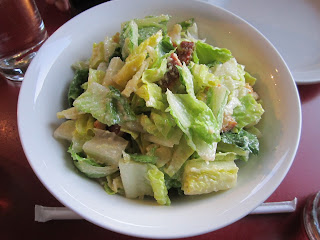 I interspersed bites of fried chicken with the Caesar salad. The salad was dressed perfectly. Their Caesar dressing is extremely flavorful and light. I rarely would describe a Caesar salad dressing as light, but the only way to get the lack of cream in the dressing across is to describe it that way. The dressing is more about garlic and cheese than it is about cream. They may even put in a smidge of mustard. The bottom line is the dressing sticks perfectly to the crisp lettuce and homemade croutons without being overwhelming or too creamy.

My only wish for this experience was that I had a fellow diner with me to kvell over the food with! Instead, I have not stopped talking about my decadent mid-afternoon dream at Strip T's. I do not use the term dream loosely as I have been known to dream about their Caesar salad and so this meal literally fulfilled my dreams. I can't wait for Tim Maslow and team to open a more T accessible restaurant later this year in Brookline. In the meantime, I will continue to make excuses to visit Watertown for the awesome food and laid back ambiance and I recommend that you do the same.

Photo from past Strip T's experience.
Posted by Food, Friends, 'n Fun at 12:17 AM No comments: