The price is right at Bon Me

Today I went for a run and missed lunch. I know how do such things happen? So, I snarfed a power bar and then had room for an early dinner. I was planning on getting something downtown, but I stumbled upon the Bon Me truck. I asked them what would be lightest and they suggested the rice noodles with vegetables and sesame chicken. As I was about to pay, I saw that they make chocolate rice pudding.

The people in the truck were kind and knowledgeable. The food was delicious. I think that their schtick is a great one, you choose the meat on top of either a roll, rice or noodles. There are additional add ons that you can get like eggs, edamame or additional meat.

I wasn't in the mood for a drink, but had I been, they had a lot of tasty treats. I always want dessert and the rice pudding was the highlight of the meal. It was perfectly creamy with much cocoa and hints of cinnamon. I plan to go back again soon and take some pictures to share!

In the meantime, go find out where Bon Me is hiding out on the Boston Food Truck Tracker Site. While you're at it, use LevelUp to save when you pay.

Meritage with a view on the side

We made a reservation for Wednesday, and they sat us right away in a beautiful window seat where we overlooked the Boston Harbor. When you have a view like this, no matter what the food tastes like, it's a good night. The only menu to order off of was the restaurant week menu which meant that they were focused on making it memorable. 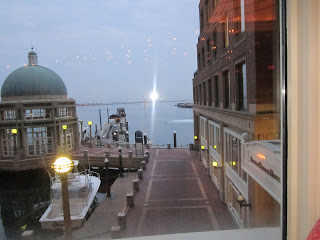 To start, we each had three rolls and the butter had a piped M in the top. The bread was homemade and outstanding. I especially liked the brown bread which tasted a little bit nutty and wheaty. The butter was soft and spreadable. 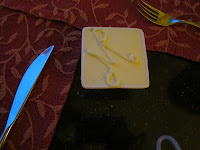 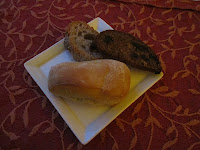 For our starter course, we both got the salad which was beautifully presented. We did not even finish our bread before it arrived. The veggies were fresh and wrapped in a cucumber package on top of tomatoes. I was surprised that there were two tomatoes on the bottom because it is not yet tomato season, but they tasted pretty good. The salad was served with minimal dressing to highlight the fresh veggie flavor. While I enjoyed this, my dining partner wished for more dressing. The only other time I had a salad presented like this was at my cousin's wedding at a fancy Philly hotel. 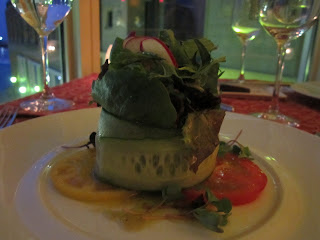 As soon as the salads were cleared our entrees were brought over. Again, we ordered the same thing. I was debating between the fillet and the braised boneless ribs and went for the ribs because they came with better sides--polenta and collard greens. I was happy I ordered this because it was beautifully presented and very rich and tasty. The portion was manageable if not small. I am curious if they made their entree sizes smaller for restaurant week or if they are always that size. The beef was perfectly tender and broke when I touched it with my fork. I could have eaten more. 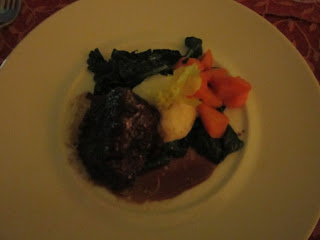 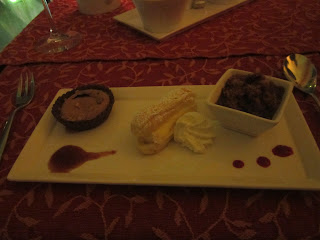 My dining buddy ordered the savory dessert dish which was a daring move. It was a crepe filled with leeks, cheddar cheese and fennel. I enjoyed it as did he. It was incredibly creative and a unique way to end the meal. 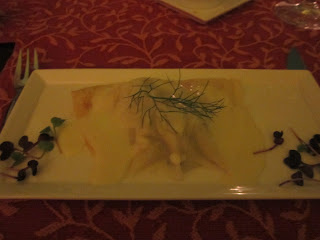 Overall, Meritage was good but not great. I thought the food was great for what I paid, however, if I had the same restaurant experience while paying full price I would have been unhappy. The service was prompt if not rushed and the entree was small and not completely unique. I was hoping for a much better experience given the other restaurants I tried in its tier during restaurant week. The best thing about the restaurant was the view. It is perfect and beautiful. I am interested, however to see what Meritage would be like on a regular day where they are serving their full menu. As I have appointed myself the queen of brunch, this is a place I would be interested in trying in the brunch category.
Posted by Food, Friends, 'n Fun at 10:21 PM No comments: